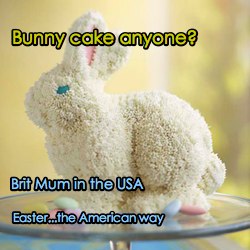 This week Mothership, our Brit mum in the US lets us in on her full on (yet eco friendly) Easter preparations…

Today was spent in focused preparation for all things Easter which, as is usual for every holiday, involved trying to explain to Four why I wasnâ€™t going to spend our weary and increasingly pathetic dollars on plastic crap from China that would only spend a short time in our company before making its to landfill. Instead we decided to plan carefully, stick assiduously to our shopping list (which we promptly forgot at home), make wise selections of festive activity with due consideration for the planet, and at the same time maximise opportunities to consume sugar which can be stored most efficiently about the body and (allegedly) converted into energy should the circumstances demand it.

That my own rear end tests the supposition that there might actually be a 32 trillion calorie circumstance within the realms of possibility is no reason to be curmudgeonly about the eco-friendly nature of our familyâ€™s attitude to Easter baskets. You should have seen some of the ones I denied Four! There was one that was the size of a toilet bowl, pre filled with a huge, garish pink stuffed bunny made of something that looked scarily flammable, tons of that cellophane â€˜grassâ€™ that you keep finding long after the Fourth of July, a chocolate chick the size of a newborn human baby and a gazillion jelly beans.

Did I hear someone say childhood obesity epidemic?

We are going to go to visit friends for supper on Good Friday and we are bringing them a bunny cake (pictured above). The bunny cake is one we crack out every Easter at least once. It is a 3D bunny with accompanying egg from a fabulous tin that seemed very expensive when I bought it on a whim from Williams Sonoma when pregnant with Four and imagined myself a domestic goddess (oh, how I laugh at my naÃ¯vetÃ©, now). However, itâ€™s actually incredibly hard to not turn out a perfect bunny in two halves that you then stick together with icing and either dust with sugar or cover in something more ambitious like chocolate ganache (do not recommend the latter if small, uncontainable hands nearby as gouges and fingerprints very unprofessional looking and can make some diners feel a bit queasy).

Saturday we are going on a hike to a mountain that is currently ablaze with lupines and California poppies. We will rise early (no! really? With two small children?) and take a breakfast picnic with us to eat in a meadow of wildflowers. Four wants to bring some coloured hard boiled eggs, so Four, One and I dyed some with a kit.

I had done egg dyeing last year and it was a lot easier. I couldnâ€™t think why at first and then I realised it was because One had been a baby and we could park him somewhere and ignore him. Now he is Toddzilla and was hellbent on tipping over the tubs of dye, screeching â€œNo! MINEâ€ whenever we tried to pick up one of the18 hard boiled eggs for ourselves, and then, when given one of his own, dunked it in purple dye with his hands, wiped his hands on his face and hair (yes, still violet 7 hours later), threw the egg on the floor, jumped on it a few times and then calmly sat down, picked away the peel and ate the egg. At least he was quiet for a bit.

Most importantly of all, on Sunday we are expecting the Easter Bunny herself to have paid a visit. She will have drunk quite a bit of wine on Saturday night after the children have gone to bed as her best mate from LA, the Hollywood Bunny is coming that night to spend the holiday with the family. Hopefully, they will remember to put out the eggs filled with Gummi Bears (by special request) and other forbidden treats without stepping on any of them or falling over, laughing hysterically, on their return path through the garden.

We also really hope the Easter Bunny et al. donâ€™t eat all the candy themselves and have to wake the Easter Bunnyâ€™s husband and make him go to the shop to buy more in the middle of the night because they are too drunk to drive. Iâ€™m not making any predictions. Iâ€™m just saying.

Mothership is a former pop star, singer, composer, and writer from London who was abducted by aliens (a German one who promised chocolates and a cleaning lady) and brought to southern California to live in a small town by the sea with her son ‘One’ and daughter ‘Four’. Keep up with her escapades on her blog, Motherhood: The Final Frontier