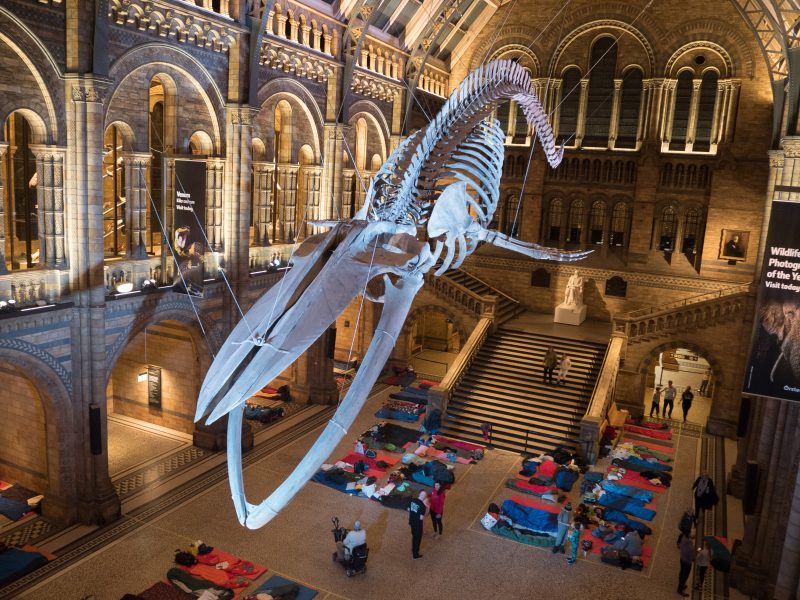 No, we didn’t get much sleep and it was tough getting up to go back to school this morning, but Dino Snores for Kids was, according to Alfie, ‘the best thing we’ve ever done’. I have to say, I agree with him – from the moment we arrived at 7pm on Saturday, until the museum opened at 10am yesterday morning, the whole experience was absolutely unforgettable. 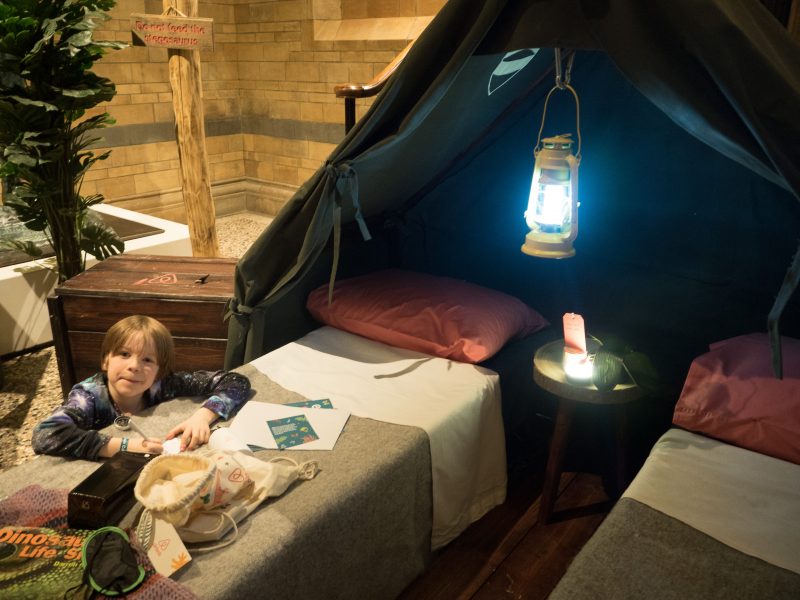 Dino Snores is a monthly sleepover at the Natural History Museum for children aged between 7 and 11. Children sleep on mats in the Hintze Hall under the awe-inspiring skeleton of Hope the blue whale. Alfie and I were lucky enough to be invited by Air BnB to stay in their Base Camp, which is on a balcony overlooking the hall, and it was amazing. We had our own little camp beds under a canopy with a storage chest, table and lamp. Plus, Alfie was given a canvas backpack (beautifully illustrated by Anorak magazine), packed with an Explore magazine, poster, water bottle, pen, luggage tag, eye mask and wind-up torch, which he was delighted with. Our sleeping area was tucked in a corner next to naturalist Alfred Russel Wallace’s statue and bedecked with bugs, tropical plants and a ‘Do Not Feed the Stegosaurus’ sign. 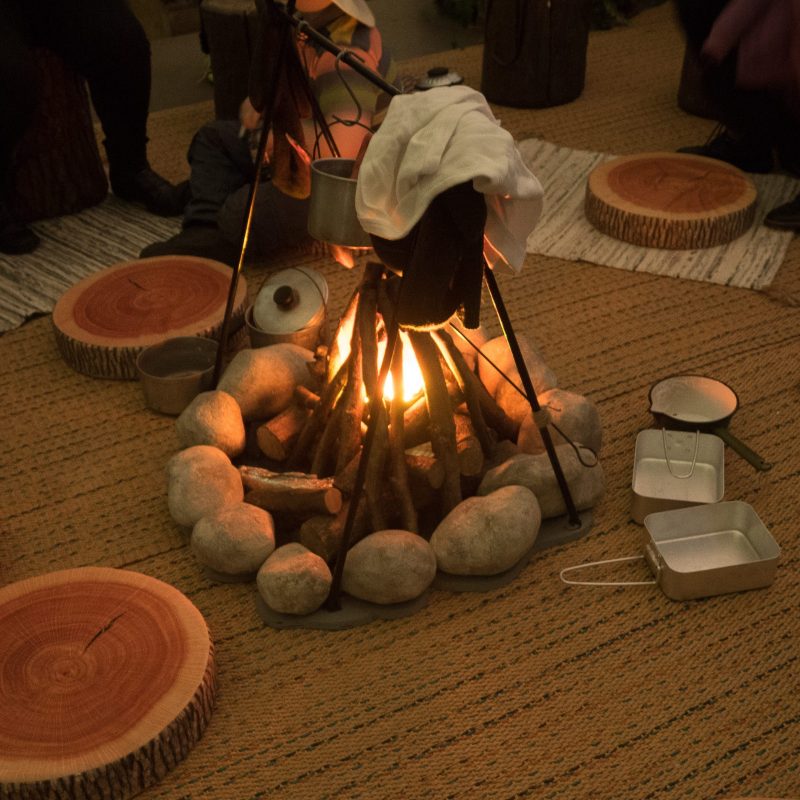 Once we had checked out camp, we met our fellow explorers at the campfire where Camp Chief Captain John (in full Victorian explorer garb) briefed us on the night’s activities. Our first stop was the lecture theatre for a talk on Super Sharks. Alfie loved hearing about and seeing slides of the seemingly cute cookie cutter shark, the alien-looking goblin shark and the enormous megaladon, the largest predator that ever lived, from the resident (female – yay!) shark expert. We also got to look at lots of different shark teeth and jaws and passed round an ancient megaladon tooth. 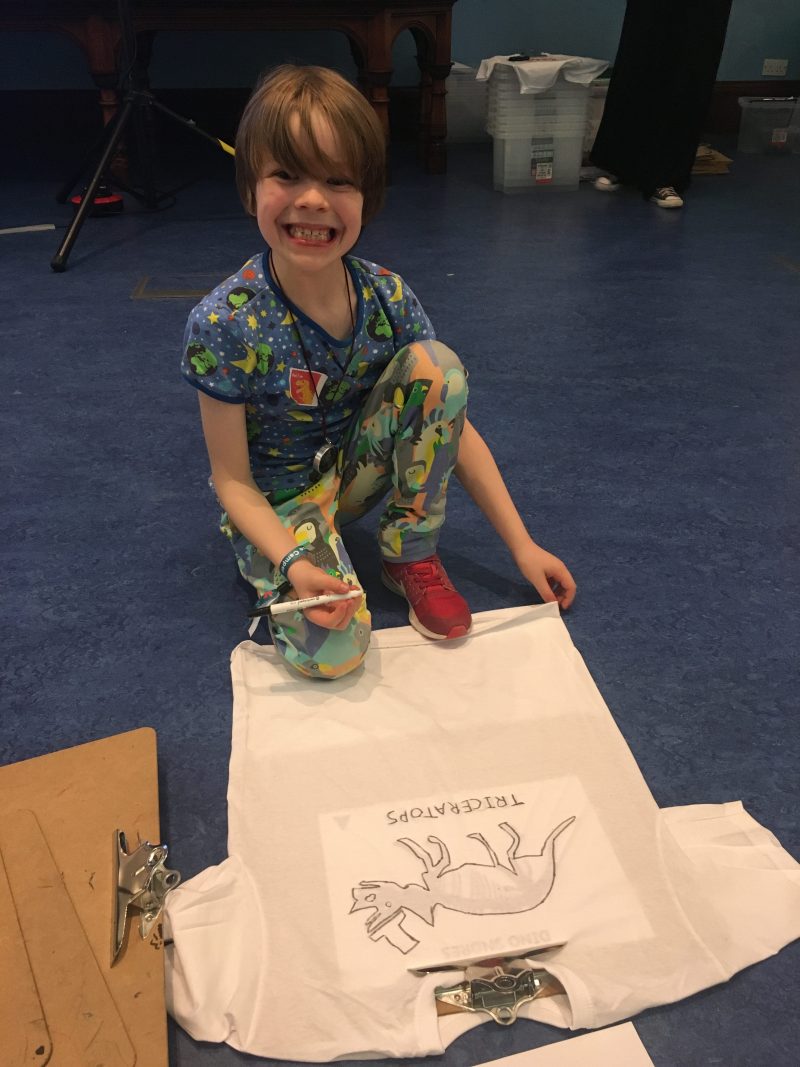 From sharks to snacks – we returned to the campfire for the packed dinners we had brought with us. Then on to activity number two at 9.30pm: dinosaur t-shirt designing. This was a lot of fun and, because there were stencils, not exclusively for budding artists. As you’d expect, there was an educational element, too, with children learning about dinosaur skeletons, skin colour and habitat as they designed. Alfie opted for a triceratops in a top hat. As you do. 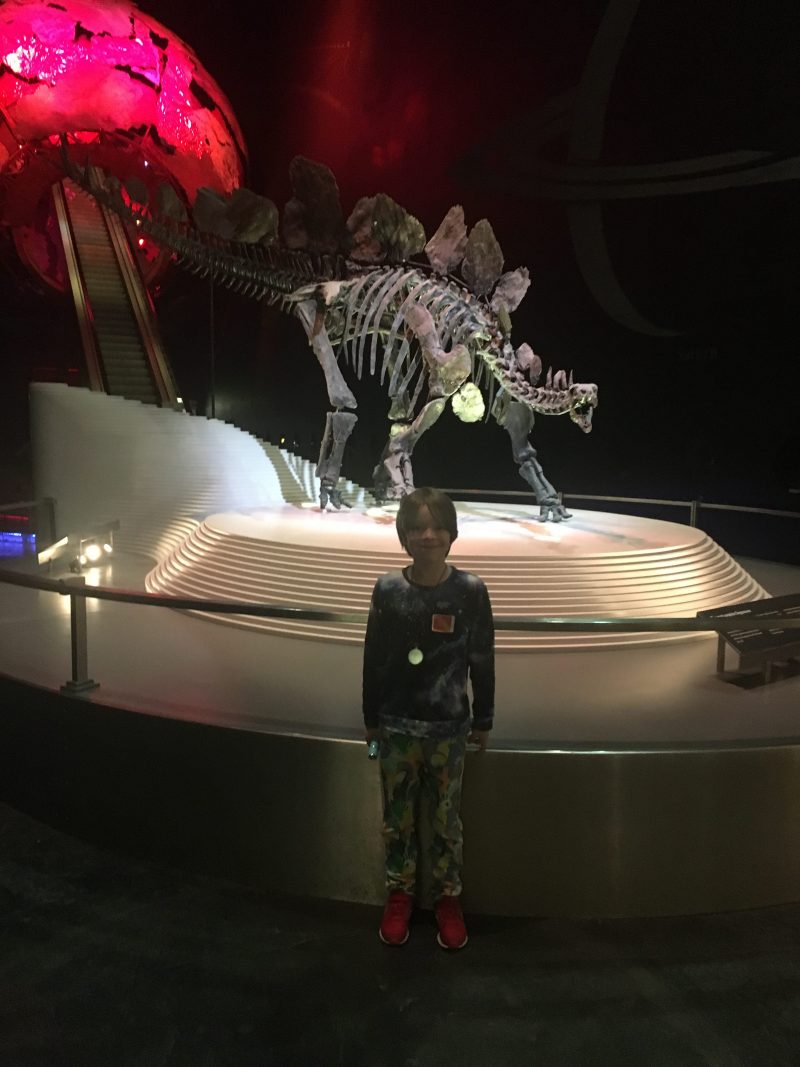 And finally, we headed for the main event – a torchlit trail in the dinosaur gallery. It was such a treat to walk through the empty museum on our own between the activities (have you ever seen the escalator to the Earth Galleries with no one on it?) and the children’s excitement was infectious. Having been handed torches, clue sheets and crayons, in we went and it was as brilliant as we expected. 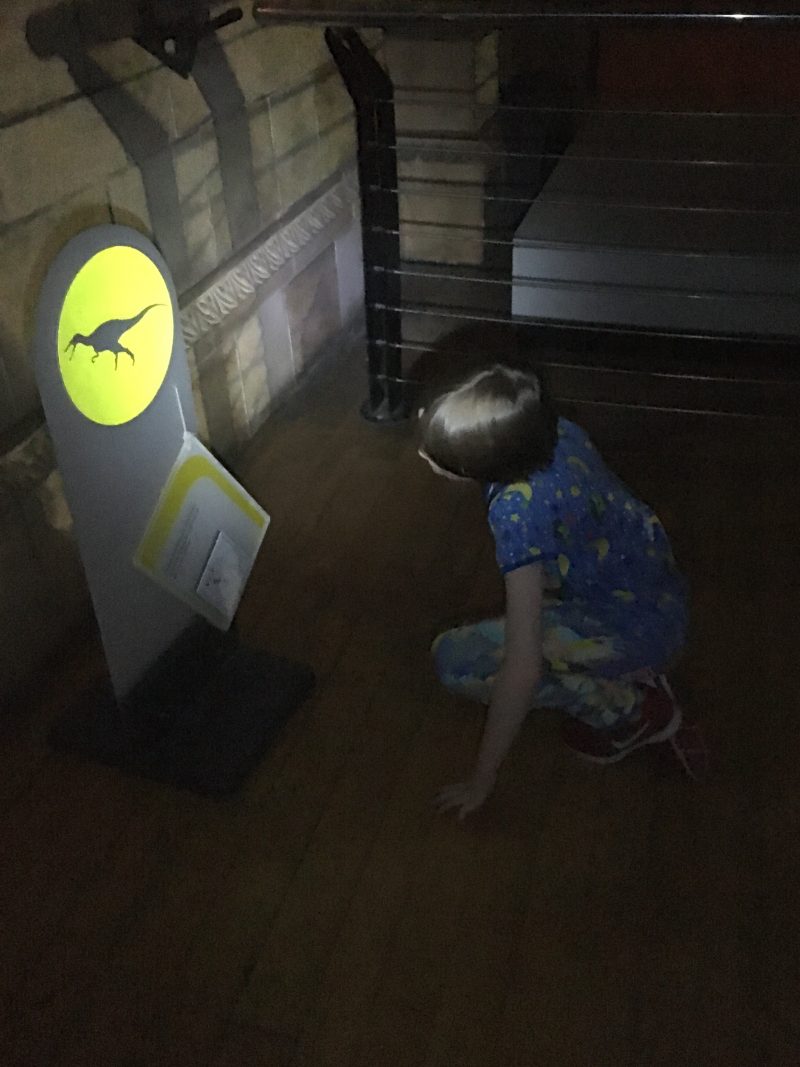 There is something pretty special about hunting down clues in a dark gallery, with dino skeletons looming overhead and, of course, the infamous animatronic T-Rex roaring away (Alfie and I got to see him on our own – must be the first time viewers haven’t been five-deep!) 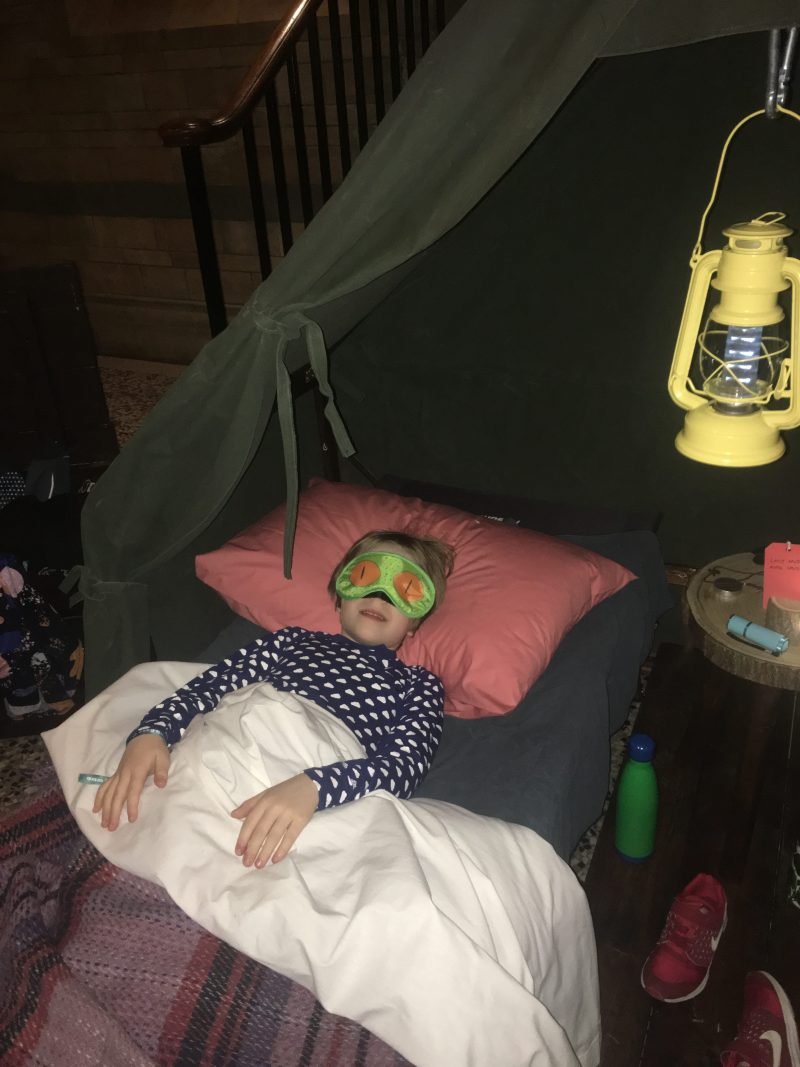 At 11.15pm, it was time to return to camp and get ready for bed. The attention to detail was just awesome – the sign to the toilets read ‘Long Drops’ and they were lit by lamps, with spiders, snakes and plants dotted around. Lights off was at midnight, so Alfie insisted on reading until then and, after a few screams and coughs from downstairs, it quietened down surprisingly quickly and we both got a few hours sleep. 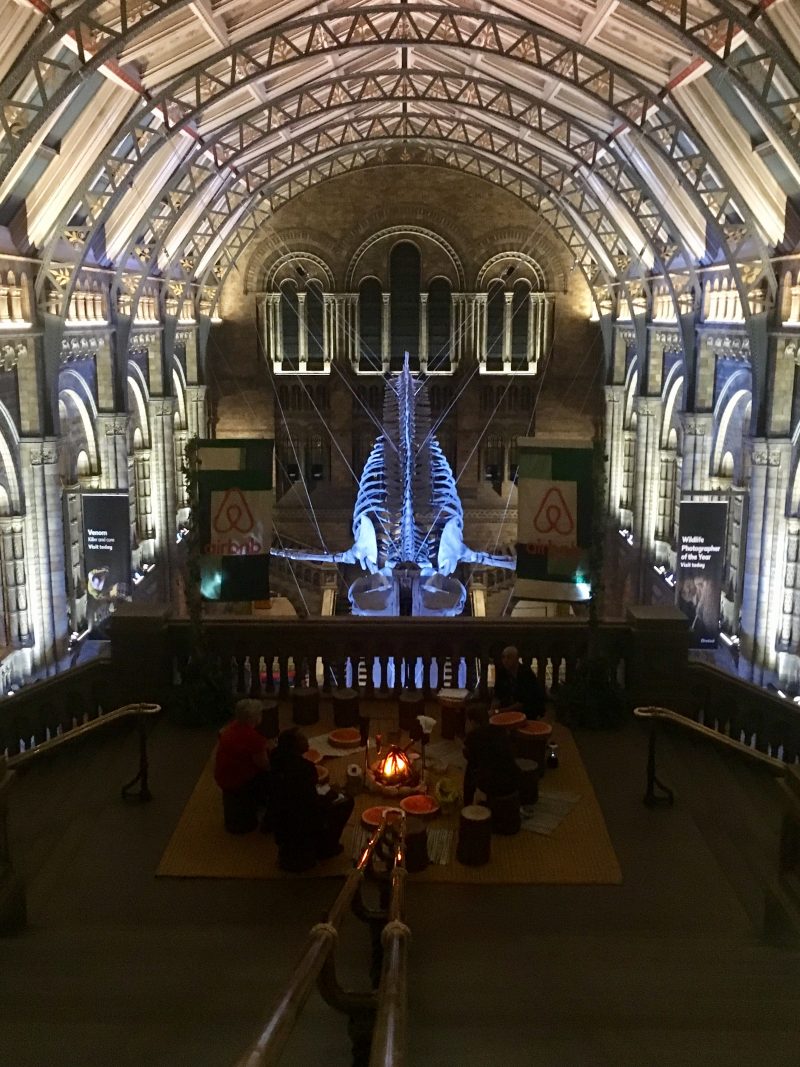 Our wake-up call was at 7am sharp and we reconvened at the campfire for breakfast, served in mess tins, and coffee, before packing up and heading down for a live animal show with The Animal Man. This was great and perfect to ease weary parents into the day. The children got to see loads of interesting animals from a tarantula to a skunk, via a bearded dragon and a meerkat, all in the spectacular setting of the Hintze Hall, and then it was all over. Well, nearly – there was still half an hour before the museum opened, so we took advantage of the lack of queues for dinosaurs to see them in the light and, naturally, hit the gift shop. All in all, the whole experience was pretty special. Alfie and I will never forget it and would both do it again in a heartbeat.

Dino Snores for Kids sleepovers are held once a month at The Natural History Museum and cost £60 per person. Base Camp can’t be booked, but everyone who books Dino Snores has the opportunity to win a place there.