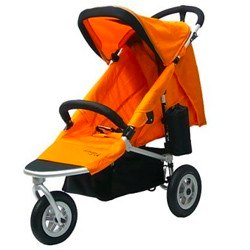 Here in the UK, the Air Buggy Mimi is a fairly recent addition to the pushchair market but a bit of digging indicates that it’s garnered quite a bit of popularity in Japan.

Aimed at the parent who wants to do a bit of everything, so pushing through busy urban streets to long walks, this is a 3-wheeler that I imagine competes with the likes of Phil and Teds and Baby Joggers but to name a few. Straight off the bat I’d say they haven’t exactly revolutionised the wheel in terms of looking particularly different although they do have an edge with their colour choices as their black and brown versions in particular do look an awful lot sleeker than their famous counterparts.

At 10kg, it’s lighter than it’s counterparts with its lightweight black or silver aluminium frame. The seat reclines using zips so it only has 3 recline levels, whereas with a Phil and Ted’s for instance, it’ll go to 4. 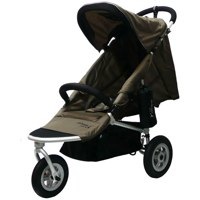 It’s got a streamlined appearance but surprisingly, this doesn’t translate into manouevrability based on the fact that whilst the front wheel does swivel as you’d expect, it doesn’t go into a fixed position so God help you if you end up anywhere particularly uneven and you can forget rough terrain. The footrest can’t be adjusted which may be a bit uncomfortable for an older child. It folds neatly though by grasping levers under the handlebar and there is a strap that makes it easier to carry which is a nice touch with this type of pushchair.

It scores some serious brownie points because everything comes with the pushchair so you don’t need to get sucked into buying lots of extras which can seriously push up the price of your pushchair and make the process a tad tedious. That’s an all weather kit, shopping basket, wrist strap, stroller mat, drink holder, and tyre pump. The one additional thing you can buy is adaptors to put a Maxi Cosi Cabriofix car seat on but in essence, you can buy this pushchair and you’re good to go.

The RRP is Â£399.99 which considering it’s pretty much all in bar the adaptors, this is pretty good as long as you’re OK about the front wheel. Whilst it does have a lie flat position for newborns, there is no mention of a carrycot, so it doesn’t look like you can put this in pram mode. But…I did find this at Winstanley’s Pramworld in 4 bright colours for Â£299 which is quite a bargain! You can also get it in brown or black but they do cost more (although look very good) – Â£359.99 from BabyBoom2000.

Ideal for: Those that want a stylish jogger styled pushchair without the pricetag.

Bang for your style buck: Good bang. Liking the choice of chassis, the extras included, looks fab in black or brown, but the front wheel does let it down a bit.

Weight range: About a kg lighter than it’s other 3 wheeler competitors so light in that context, although obviously much heavier than your typical lightweight pushchair.

Don’t forget that you can see other pushchairs and prams we’ve featured in our new feature The Pushchair Track.