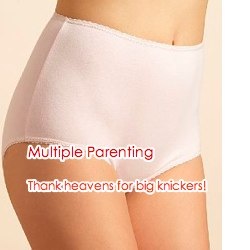 This week, Emily shares her tale of bearing her big knickers in church…

I blame the Vicar for my momentary lapse of common sense. She visited us prior to the girlsâ€™ Baptism and told us how welcome weâ€™d be at their Sunday morning family service. I was feeling an increasing amount of guilt at our part-time approach to religion (Easter eggs, Christmas presents, silver engraved Christening giftsâ€¦) and felt I should at least make an effort to take the children to a few services. Big mistake. Huge.

In my book a â€˜familyâ€™ service would be totally geared for parents of small children; lots of toys, a ban on tutting and shushing, and a duration to suit the attention span of a child ie; no longer than an episode of Charlie and Lola. In fact, if there could actually BE an episode of Charlie and Lola playing in church, it would be a help. But no. It seems my Vicarâ€™s definition of a â€˜familyâ€™ service is simply one at which there are many other families before whom we can embarrass ourselves.

It started with a poo (doesnâ€™t it always?) just as we were ready to leave, making us late and destroying my plan to slip in early at the back of the church where there is space for the buggy. Nappy (and trousers, and socks, and shoes. Shoes? I mean, reallyâ€¦) changed, we hurtled down the cobbled lane to the church, sweat pouring from my brow. â€œMu-mmy its too-oo-oo bu-mp-eeeeeeeeeâ€ wailed the Toddler, teeth a-knocking. We creaked open the ancient church door and attempted to negotiate our way inside. A few days previously the locking pin had jammed on the buggyâ€™s front wheels, fixing them in the forward position. Pushing a triple buggy without swivel wheels is like driving a car without power steering through Hampton Court maze. Only less enjoyable.

After ramming two old ladies, crushing the Vergerâ€™s toes and knocking over a flower display I was forced to abandon the buggy in the aisle and lug the children to the only obviously available pew towards the front of the church. I immediately issued each child with a box of raisins, and tried to tune into the sermon, which seemed to be something about a donkey. And work ethics. I didnâ€™t know donkeys had work ethics.

With the toddler on my lap I was able to secure each baby on the bench with an outstretched arm either side of me, like human seat-belts, but my biceps were starting already to quiver with the strain (I wondered momentarily if I had hit on the ideal work-out for my bingo wings), and my shortage of free hands was leaving me increasingly vulnerable to the Toddler, who had now twisted round and was inserting raisins into my nostrils.

I began moving my head rapidly from left to right, hissing â€œNO!â€ at him, in what I weakly hoped might be mistaken for evangelical writhing. I realised that everyone else had their head bowed in prayer, and I followed suit. â€œMummy, everyoneâ€™s asleep! Look Mummy! Mummy, donâ€™t go to sleep! MUMMY! MUMMY!â€ I broke off from my mental wish list for God (health, harmony, peace, a decent lie-in and a Boden rain-coat) and glared him into submission.

Stand? How? Keeping a hand on each of the babies, who have a tendency to stage-dive off surfaces if I release my grip for even a split second, I tentatively rose from my seat, trying to gently slide the Toddler from my lap onto the floor. Aghast at this sudden rejection, he clung like a limpet to my trousers, which gave up the fight with pathetic ease and lowered him down my legs like a human elevator, displaying my flabby bottom to the two dozen rows behind us. No doubt concerned that the odd person near the back hadnâ€™t cottoned onto this unexpected flash of flesh in the House of God, Twin One took it upon herself to inflict her air-raid siren scream on the congregation.

As I stood there, my lily-white ample behind on full display; both arms incapacitated in child-restraint, I met the gaze of the Vicar, who tried valiantly to continue with her sermon; â€œWhat we have to be thankful forâ€. I realised that, over the years of motherhood, oneâ€™s tolerance levels for embarrassment rise with each mortifying, child-induced, incident. If I continue at this rate, by my forties I should be entirely impossible to humiliate. And I thanked God that I had given up skimpy sexy g-strings in favour of big, modest pants of humility.