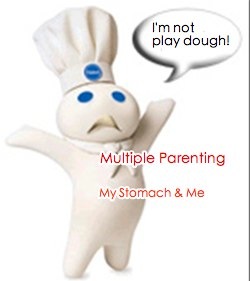 This week, Emily waxes lyrical about the ravages of two pregnancies on her stomach with hilarious honesty…

Yet another celebrity mum is snapped stretching out on a beach in a skimpy bikini, three months after having a baby. I groan and push the offending magazine back into the rack, slinking out of the newsagent in despair. I try in vain to convince myself that she was never pregnant in the first place; she has in fact been walking around L.A. with a (tiny) cushion up her jumper for nine months, before whipping it out, placing an order with bolivianbabiesrus dot com and hiring a team of nannies to push bambino round the block.

It is a well-known fact that your odds of escaping the scars of pregnancy reduce with each child you produce. I sneer at mothers of singletons who proudly preen their taut tummies; well, of course youâ€™re back in shape, youâ€™ve only got ONE child, for Godâ€™s sake. ONE child is a piece of cake. ONE child gives you time to go to the gym, do star jumps in front of Cbeebies, and sit-ups with them sitting on your chest for extra ballast. You only have ONE plate of fish-fingers to polish off when they refuse to eat, and it is unlikely that the night-wakings of ONE child send you screaming for a sugar rush quite as often as your multiple mum friend.

Yesterday I sauntered across the bedroom to the shower. I screamed as I caught sight of a naked stranger in the mirror, and just stopped myself lunging for the â€˜phone; â€œEmergency services, good morning, whatâ€™s your emergency?â€ â€œMy body has been stolen and replaced with Mr Blobbyâ€™sâ€.

I had four children in sixteen months (admittedly in very economical batches of two) and whilst I love them all unequivocably I still grieve for my lost stomach. There have of course been many changes to my erstwhile slender self, but my lost tummy beats them all.

I can handle the deflated boobs that look like left-over balloons a week after the party. I can handle the fact that my vagina seems to have turned into a gynaelogical camel; retaining water from my bath for up to an hour before unceremoniously and uncontrollably releasing it onto a friendâ€™s carpet. I can handle my swollen fingers, still too fat for my wedding ring a year after the birth, prompting fourth finger glances from interfering old biddies, and a third finger response from me. All these things I accept with alacrity as the trade-off for the undeniable gift of becoming a mother. But oh, my poor beleagured stomach… Stretchmarks weave across every inch, mapping out the London Underground in a silvery snail-trail. My baby bar-code.

Losing the baby weight â€“ and more â€“ has not improved the thin, wrinkly skin of my Sharpei-dog-stomach. Indeed it has worsened the situation; as I shrink, my skin crepes and puckers, sucked into my caverous belly-button like quick-sand disappearing down a sink-hole. I darenâ€™t attempt a serious sit-up; when I ease myself upright in bed, my insides pop up to say hello, forcing their way through the pathetic resistence offered by my stomach muscles. There is nothing merely separated about my muscles; they never had the chance to recover between pregnancies, and now they donâ€™t understand each other, bicker over the washing-up, and are threatening divorce. My children push me onto my back so they can dip their hands into the spongy play-doh of my stomach. I am the Pilsbury dough-Mummy.

So what can we multiple mums do about the ravages wreaked on our bodies by successive pregnancies? Short of surgery (and believe me, Iâ€™m saving for it), not a lot. High-waisted trousers hide a multitude of sins, but be prepared for the shuffle-truffle roll-down when you open the zip; itâ€™s not a natural precurser to a romantic coupling. Perhaps the aversion factor is natureâ€™s way of curbing the population explosion? Iâ€™m sure there are mothers of more than two children who are lucky enough to have escaped the worst of the battle-scars, but those of us who canâ€™t rely on good genes can only fall back on good jeans. And I have a pair in every colour.